Search
Skip to content
For most celebrities, there is no price too high when it comes to looking great. That is why you may find it difficult to believe the price tags on some of these iconic dresses worn by Hollywood’s rich and famous celebrities. But for them, it’s just another day in the life. Take a look at 15 most expensive dresses ever worn by celebrities.

Jennifer Lawrence: The Hunger Games actress quickly became everyone’s favourite quirky starlet after a string of box office hits. Her appearance at the 2013 Academy Awards was a huge deal and everyone was waiting to see what she would wear. The actress chose a blush pink princess style gown styled by Dior and worth a whopping $4 million, according to Page Six. 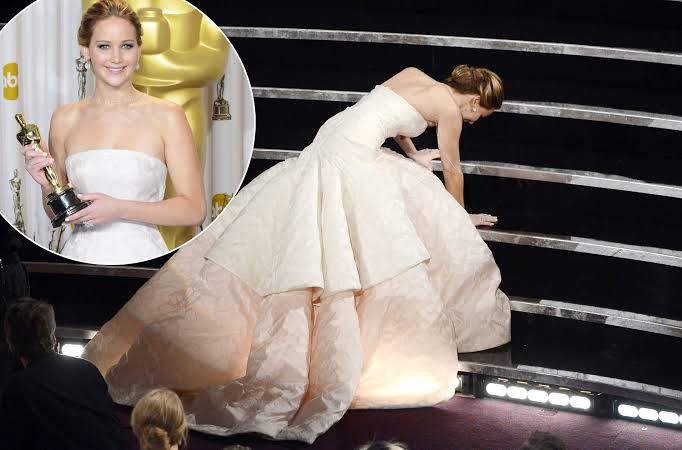 But what really made the night memorable was when Lawrence climbed the stage to accept her Oscar for Silver Linings Playbook and stumbled over the train of her gown. Luckily, the star laughed it off during her acceptance speech saying: “You guys are just standing up because you feel bad that I fell and that’s really embarrassing, but thank you.”

Serena Williams: As the mother of 23 grand slam singles titles and one of the top athletes in the world, you can bet that Serena Williams has worn some of the most expensive looks of any celebs. One of her most iconic looks was her wedding dress or should we say, dresses. For her big day, the tennis star wore three separate gowns by Alexander Mcqueen and Donatella Versace. The Mcqueen by Sarah Burton gown alone cost over $3 million and at the end of the night Williams rocked some jeweled Nike sneakers.

Nicole Kidman: The actress wore a dress by designer John Gagliano for Christian Dior that cost $2 million. The gorgeous gown featured chartreuse yellow silk with floral embroidery around the neckline. The Asian-inspired embellishments were considered a risky look at the time, making kidman a true trendsetter. 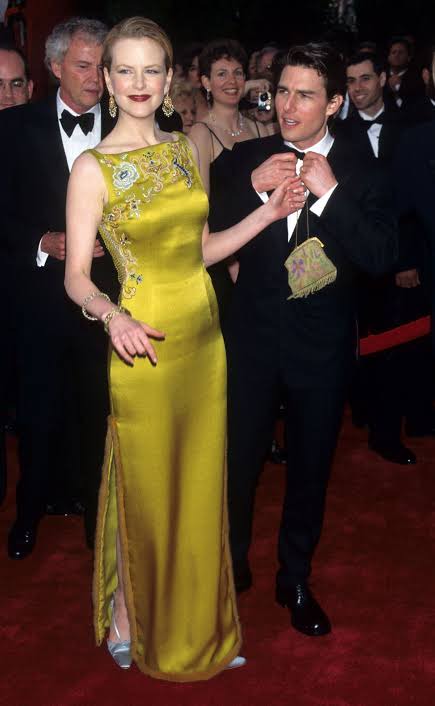 The gown in all its old couture glory was named by Smithsonian as one of the most influential Oscar dresses of all time.

Marilyn Monroe: The biggest star of the 50s and 60s wore some of the most elegant dresses you can imagine. When Marilyn Monroe performed for the president’s birthday in Madison Square Garden in 1961, she wore a floor-length pink sequined gown designed by Jean-Louis Berthalto worth 1.3 million dollars today. Her iconic seven year itch dress from 1995 also sold at auction in 2011 for an unbelievable 5.6 million.

Audrey Hepburn: When she wore what is now arguably the most iconic dress in fashion, Audrey Hepburn had no idea it would go down in history. The famous little black dress from Breakfast at Tiffany’s was created by Givenchy for the project and later auctioned off for $807k dollars. While a calf-length version was originally crafted for the film, the designer also created a separate attachment for the dress which the star wore during the opening scene of this movie.

Rihanna: As an artist and fashion lover at heart, Rihanna went all out for the 2015 Met Gala. The singer wore a yellow gaupee gown and cape that took over 50,000 hours of work to hand embroider. The dress weighs an astounding 55 pounds. While walking the red carpet, Rihanna needed some help to carry it, telling a reporter: “I’m so in love with this dress, but the train is insane.” 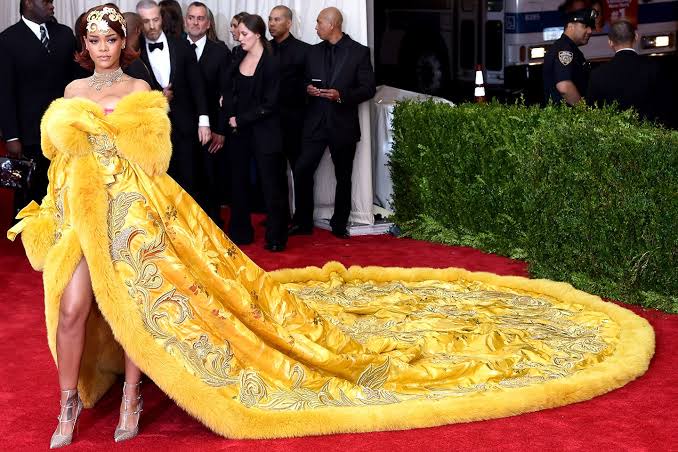 While we are not positive how much this particular dress was worth, the designer’s elaborate and artistic gowns go for upwards of $500k dollars and even more for custom designs.

Kim Kardashian: Another extravagant wedding gown was worn by none other than Kim Kardashian. It may have been her third marriage, but that is no reason to take it easy on the dress. When she married Kanye West, Kim wore a custom gown designed by Riccardo Tisci for Givenchy oat couture. The dress was worth an estimated $500k and the reality star looked incredible.

For the massive Italy-based event, Kim ensured her guests were comfortable and provided individual aesthetic treatments and glam glow-up. The famous now-divorced couple spent at least $2.8 million on the special day.

Kate Middleton: For the royal wedding of Prince William and Kate Middleton in 2011, the bride impressed viewers all over the world with her handcrafted gown that perfectly mixed modern and traditional bridal styles. The duchess’s gown with its nine foot long train was designed by Sarah Burton at Alexander Mcqueen and was estimated to cost around $400k. Kate also kept with the tradition and had her something blue sewn directly into the lining of her gown.

Beyoncé: The lemonade singer has worn some pretty extravagant gowns and outfits over the years, many of which appeared in her recent music videos and red carpet appearances. One of her most expensive looks to date was her dress for the 2016 Met Gala. Working with the Manusex Machina theme, the star wore a Riccardo Tisci for Givenchy latex style gown valued at $300k. 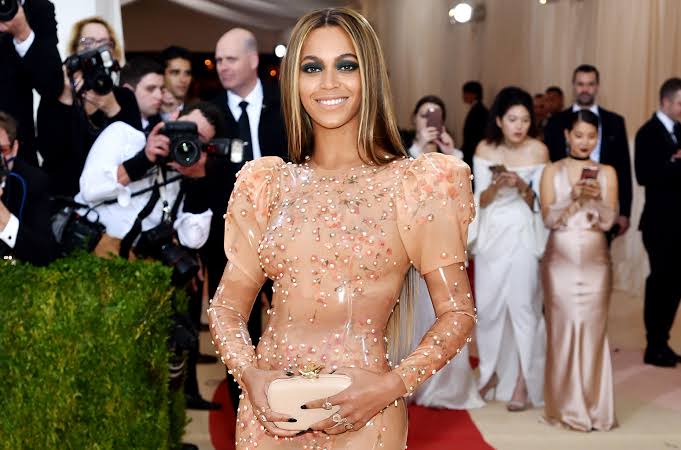 The look featured an intricate design of pearls and beads with the individual pearls rumoured to cost around $8k each.

Paris Hilton: In the early 2000s, the heiress and socialite celebrity Paris Hilton made a name for herself as a trendsetter. Everyone expected her to pull out all the stops and if there was one thing paris loved it was sparkles and gemstones. For the Hollywood Beauty Awards in 2017, the star wore a floor-length gown by August Getty. The piece was embellished with five hundred thousand Swarovski crystals and estimated to be worth more than $270k.

Meghan Markle: For her wedding to Prince Harry in 2018, former television actress Meghan Markle kept it simple and classy with a boatneck a-line dress designed by Claire Waite Kelly for Givenchy. The dress added a Queen Mary’s bandeau tiara beneath the elegant veil. Of course anything worn by royalty is priceless, but Meghan’s wedding gown and ensemble cost around $265k. The Fashion House stated that the design epitomizes a timeless minimal elegance.

Elizabeth Taylor: Known as the most beautiful woman in the world with good reason, Elizabeth Taylor was always one to wear the most elegant and expensive looks. For her evenings out at the 1970 Academy Awards, the actress wore a blue chiffon gown by Edith Head. The designer created the dress specifically for Taylor. She later revealed that she thought the color would make the star’s eyes pop. She accessorized with her infamous Taylor Burton diamond purchased by Richard Burton in 1969. The dress was sold at auction in 1999 for $167.5k.

Lupita Nyong’o: The Oscars 2015 red carpet was a great year for incredible and expensive gowns. The Black Panther actress wowed viewers in her long white Calvin Klein gown. The dress featured a plunging back and halter top neckline. The designer shared that the look took 10 weeks and more than 25 people to create the dress with its 6,000 hand sewn akoya pearls. The dress itself cost around $150k. 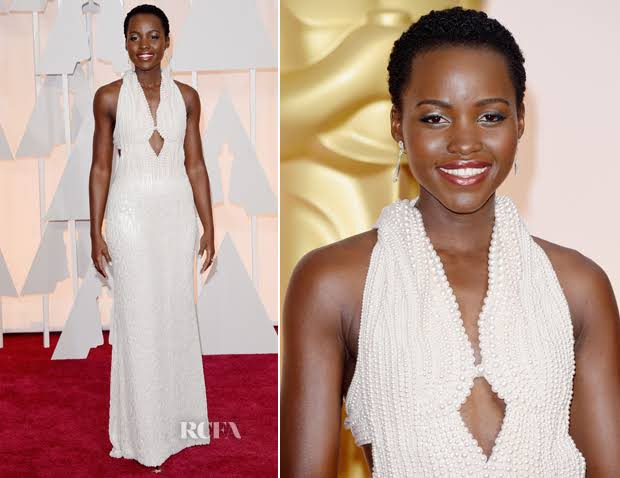 Katherine Zeta Jones: When the famous actress married Michael Douglas, she wore a beauty of a wedding gown. The dress was designed by Christian Lacroix and featured a satin bodice covered in ivory beading and chantilly lace. The gown cost the star $140k and she paired the look with a diamond tiara from Fred Layton jewelers.

Princess Diana: The people’s princess wore more than a few noteworthy gowns during her days in the royal spotlight, but one of the most magnificent looks worn by the iconic princess was her light blue silk chiffon evening dress by her designer Catherine Walker. It was for the 1987 Cannes film festival. Diana had so much success with the gown that she wore it to the film festival again in 1997. The subtle beauty of the dress immediately captured fans hearts in 2011. The dress sold at auction for over $137k.