Wizkid spotted chilling out with Burna Boy in London [Video]

Two Nigerian Afro-Pop kings Wizkid and Burna Boy were spotted having a good time together with some other guys in one of the bars in London.

In a video released on the official Instagram account of music channel HipTV, the duo could be seen singing along to “Wetin dey sup” – a track featured in Burna Boy’s new album “Twice as tall”.

The expression on Wizkid’s face could tell you that he may have had enough of something already, while Burna still looks very active.

Burna Boy has been getting lots of support from both local and international celebrities since the release of his album “Twice As Tall” on August, 14, 2020.

Many including Wizkid have taken to social media to hype the album from the Grammy nominated singer. The “Ojuelegba” crooner recently took to his Instagram story to share Burna Boy’s music cover. 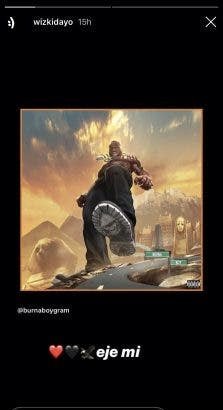 He accompanied it with the caption: “Eje Mi”, which means My Blood in Yoruba Language. He also added some love and dove emojis – a sign of support for the new album.