No Content Available
The Athletics Federation Of Nigeria (AFN) has pledged support for her sprinter Blessing Okagbare who was recently suspended from Tokyo 2020 Olympics.

The 32-year-old top Nigerian athlete allegedly tested positive for a human growth hormone substance which is among the list of prohibited substances.

However, AFN expressed disbelief about the result of the test in a statement signed by it’s President, Honourable Ibrahim Shehu-Gusau.

AFN stated categorically clear that Blessing Okagbare is an athlete that has maintained a clean record since she began her career as a teenager.

They also disclosed that Blessing Okagbare was subjected to doping test over 12 times before she came for the Olympics, hence there could be mix up.

Finally AFN promised to support and encourage Okagbare during her trying moment.

Read the full statement below: 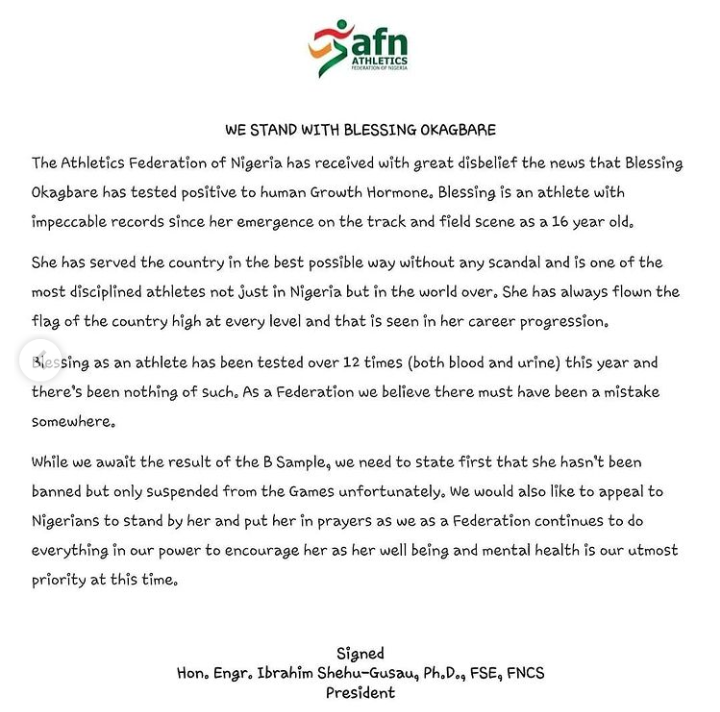 Nigerian top athlete, Blessing Okagbare, has been “provisionally” suspended for doping on Saturday.

The Athletics Integrity Unit made this known in a press statement, saying that the

The ant-doping body said Okagbare tested positive for the prohibited substance in an out-of-competition test on July 19 – four days before the Olympics opened.

7 Easy steps to achieving your goals

A South African pastor allegedly orders members of his congregation to eat grass in South Africa. He made them eat...

No doubt, people would always have their choice which would be different from others, but these choice become prominent...

A White man has taken to social media to celebrate his older lover for gifting him a new Ferrari. In...

7 Easy steps to achieving your goals