Search
Skip to content
Orpheus and Eurydice, is a tragic love story from Greek mythology that has inspired many great artists in the centuries since. A story that speaks of the power of music to form unbreakable bonds whilst also challenging notions of faith in the word of the gods. So, who were these star-crossed lovers, and how did it all go wrong for them? Let’s find out together.

Orpheus was a talented young man from Thrace who was famous for his mastery of the musical arts. It is claimed by some that he was the son of the god Apollo and that the muse Calliope was his mother. His skill with various musical instruments was uncontested, but his most magical gift was his singing voice. With his beauty and his majestic performances, he was able to charm both mortal and gods alike.

He was known also to have an adventurous spirit, taking part in many expeditions, accompanying even Jason and the Argonauts on their quest where his musical gift and its soothing power played a pivotal role in their success. His own personal tale however, truly begins with the chance meeting of the love of his life. At one of his many glorious musical performances, his eyes fell upon a beautiful and shy young wood nymph and from the moment his gaze caught hers, neither would ever be able to look anywhere else again.

The name of the captivating female creature was Eurydice. As the music swelled around them in that moment, so did their hearts and the phrase love at first sight was never more applicable. From that day forth, they were inseparable, spending every waking moment together and before long, they took the seemingly inevitable decision to marry. Their wedding day was a glorious affair with a great feast blessed by the gods and the young couple seemed destined for a wonderful and happy life together.

However, as we have learnt from the many love stories across the variety of mythologies, very few ever end happily. And so it was, their joy was destined to be short lived. Unknown to Orpheus, another man had also fallen for the graceful charm of Eurydice, a shepherd known as Aristaeus, and he was determined to win the girl for himself. One day as the young lovers took a gentle stroll through the woods, the shepherd made his move.

Springing from his hiding place amongst the bushes, Aristaeus leapt towards Orpheus, intending to kill him. Luckily Orpheus had sensed the movement and was able to avoid the attack, grabbing the hand of his wife and running quickly away with her. The shepherd took chase immediately and the pursuit through the woods was frantic and long.

All of a sudden, Orpheus felt his wife stumble beside him and saw her fall, letting go of his hand. He stopped immediately and rushed to her side, shocked to find an awful colour to her face and her breathing sharp and panicked. It was then he realised what had happened, spotting the nest of deadly vipers nearby that Eurydice had accidentally run through.

Aristaeus was nowhere to be seen, witnessing what had happened and abandoning all hope. For he knew as well as Orpheus, that the bite of the viper was deadly and that there was no cure. Eurydice died in the arms of her husband who was left a broken shell, his heart ripped from his chest before his very eyes.

As the days passed, Orpheus was unable to comprehend a life without his beautiful wife and so hatched a desperate plan to bring her back. He would travel down into the underworld himself and plead with Hades to release Eurydice back into the land of the living. It was a plan with very little chance, but at least some chance. After all, a tiny glimmer of hope is better than no hope at all.

Using the power of his song, Orpheus was able to navigate the dark underworld, even soothing the mighty three headed Cerberus with his melody to successfully pass by the beast. Reaching the Lord of the Underworld Hades and his wife Persephone, Orpheus played the most beautiful song he had ever created, telling the desperate tale of the passing of his wife and his infinite sadness.

No being, mortal or god, would have been able to resist the emotive power of that song and even mighty Hades was drawn to tears. Hades made a promise to Orpheus that he would release Eurydice from his realm and that she would follow him back out to the world of the living. However, he warned Orpheus that he must not turn and look back for his wife at any point until they were both safely back into the light. If he did so, all hope would be lost and she would be confined to the underworld forever more.

Orpheus rejoiced, overcome with joy at the thought of holding his wife again. All he had to do was simply walk back out and they would be together once more. He set off, walking slowly and listening intently for the sound of footsteps behind him. He made his way through the dark caverns until he was almost at the exit where he suddenly realised he was no longer able to hear any footsteps. 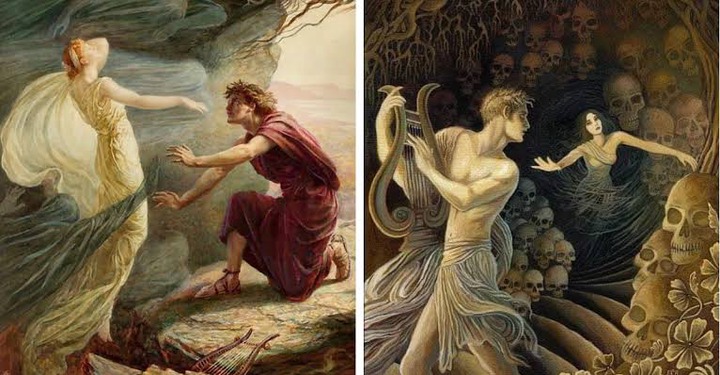 Anxiety surging throughout his veins and fearing that he was being tricked by the gods for their own amusement, he struggled and fought to resist the urge to turn but was unable to stop his body moving as his head swivelled, desperately looking for his beloved Eurydice. There he saw her, in the form of a shade, right behind him just as Hades had promised. But the deal had been broken, and he collapsed to his knees as the shade of his wife disappeared before his eyes, slipping back into the depth of the underworld, his final chance lost.

Unable to return to the underworld again, Orpheus was forced to live on alone, consumed each day by the knowledge that his lack of faith had cost him the chance of saving his wife. Several versions of the myth exist to describe the death of Orpheus. Some suggest he was killed by beasts whilst others mention his death at the hands of a group of scorned women who were devastated by his lack of interest in them. 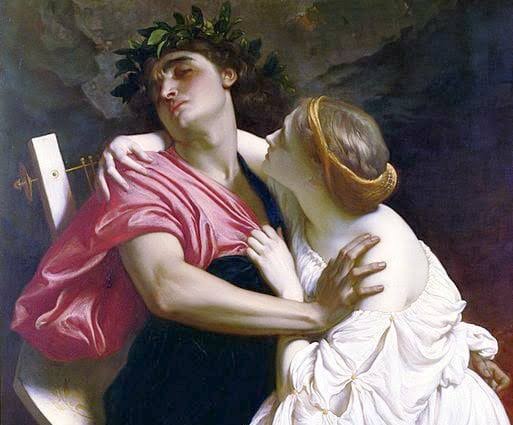 Either way, the death of Orpheus came as a relief to him with the perhaps comforting thought that his soul travelled down to the underworld where he would finally be reunited with Eurydice, albeit not in the way he had intended. A truly tragic love story that remains one of the most popular tales from Greek mythology. It is a story that has inspired a host of creative art projects across the years including music, literature, paintings, films and even video games.

You could consider the moral of the story to be a lesson of faith and trust, in both the gods and in love itself, or perhaps instead a message of logic over emotion.