by Law Blessing
in Stories
Reading Time: 3 mins read
A A
0

Isis and the seven scorpions is a classic tale from Egyptian mythology that resembles more closely a fable than a tragedy with a lesson to be taught at its heart of kindness and humility. But why exactly was Isis hanging around with seven scorpions? Let’s find out together.

Following the murder of her husband Osiris at the hands of Set, the goddess Isis was left alone and scared. Pregnant with the god Horus, she feared the vengeance of Set if he were to discover the child inside her and the threat it would pose to his grip on the throne of Egypt. She attempted to hide, but Set was able to discover her location and capture the goddess. He imprisoned her in a spinning mill and left her to weave her husband’s funeral linen.

Isis crucially however, was able to keep her pregnancy a secret. The god Thoth, aware of the child and fearing for both mother and baby if Set were to find out, came to the aid of Isis. He freed her from the mill and advised her to go into hiding in the marshes. He enlisted seven scorpions to act as her protectors who swore to keep her and her unborn child safe. Disguising her true form, Isis began her journey.

The road to the marshes was long, and so on the way she decided to stop at a nearby house to ask for food and a place to sleep for the night. Knocking at the door, she discovered the house was owned by a rich woman named Usert. As she answered the door, the rich woman saw only an old beggar woman and seven scorpions. Unaware of the true identity of Isis, she rudely slammed the door in her face, enraging the scorpions.

Isis continued on and stopped at the next house, which this time was occupied by a poor fisher girl. Despite having nothing herself, the young girl welcomed her warmly and invited her in, offering Isis food and shelter. However, as Isis slept in the comfort of the poor girls house, the scorpions were unable to forget or forgive the rudeness of the rich woman who had so much but cared so little. They channelled their combined poison into their leader, a mighty scorpion named Tefen, and he travelled back to the home of the rich woman and stung her child.

The poison swept through the poor boys body and his distraught mother rushed into town, desperately seeking help. No-one was able to aid her however, and she feared for the life of her child. Isis heard the cries of the woman and child and overcome with pity for the boy, she returned to help. Calling out the name of each scorpion in turn, she commanded the poison to leave the child’s body, thus revealing her true identity. 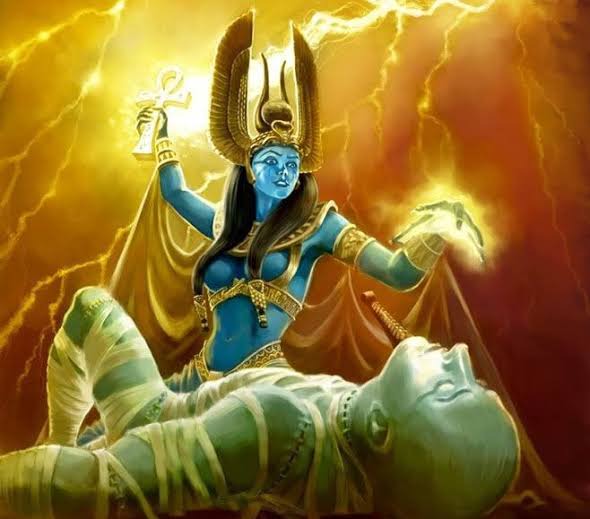 The rich woman was overcome with remorse when she realised what she had done and to make amends, offered all of her wealth and property to the poor fisher girl. Isis rejoiced and continued her journey onwards to the safety of the marshes where Horus would be born and grow into a strong god, capable of exacting revenge on Set for the murder of his father.

A myth with a clear message then, of not judging a book by its cover and being kind and giving no matter your personal situation.

HILARIOUS: Watch moment NEPA staff gets pushed down from the ladder (VIDEO)

A video of a NEPA staff who was pushed down from the ladder has been circulating on the internet. From...

Amidst several warnings issued to police officers against collecting bribes or what they call 'tips' from road users, a police...

SHOCKING: Watch video of a man cuddling a crocodile in Lagos (VIDEO)

Crocodile is one of the most dreaded animals in the world, and humans don't associate with it. However, it is...

The goal of every married woman is to have a happy marriage void of any intruder or third party, and...

BBNaija: “If I Had Won N85m, Erica Wouldn’t Receive A Dime” – Kiddwaya