After several weeks of exhilarating entertainment, the Big Brother Naija Lockdown edition is well and truly over. And it is no longer news that our champion is none other than Olamilekan Agbeleshe popularly known as Laycon.

No one could argue the fact that the 26-year-old singer and rapper truly deserves the prize as he has carefully competed for it, and fans couldn’t love him any less.

He will go home, not only as the winner of the BBNaija Season 5, but as the highest earner among the rest of the housemates.

According to the top 5 earners list posted on the Instagram page of Ubi Franklin, Laycon sits atop with 95 million Naira.

Read more about the breakdown of the 85 million Naira cash prize here.

He is far ahead of second placed Vee who went home with 8 million Naira. Rebecca Nengi Hampson a.k.a. Nengi is the third highest cash earner with 6 million Naira. Ozo could have been third if his car was to be converted to money, but he sits at 4th position with 5 million, while Dorathy completes the list with 4 million. 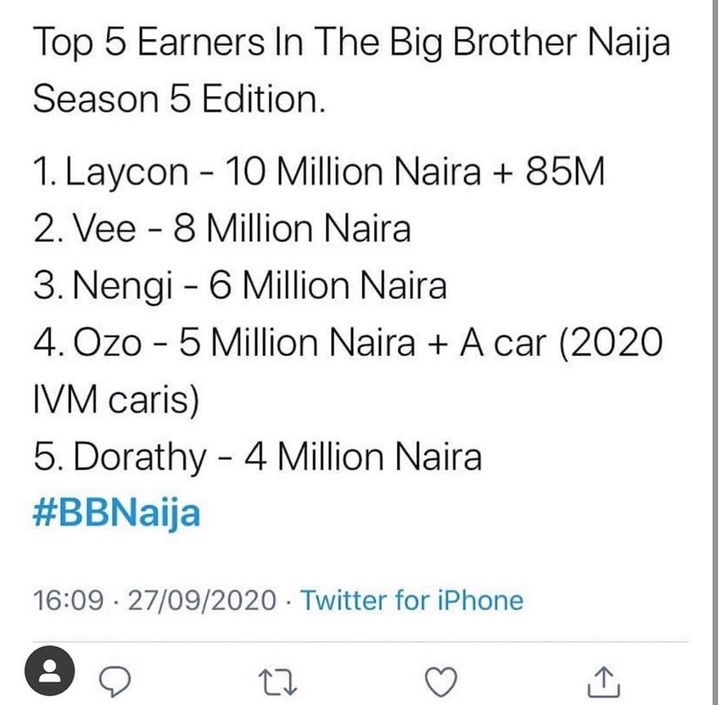 Also Read: BBNaija: Neo might have messed up his chance with Vee judging by his statements