The BBNaija Lockdown edition is well and truly over and the housemates were already getting used to their normal lifestyle outside the house, until they were called back for the award party on Wednesday.

Though the main reason why it was hosted was to honour Laycon, the grand winner of the show, with his 30 million Naira cash prize along with several other entitlements, including a car and a key to his new home.

However, it was also an avenue where the hosts of the show sums up how much each of the housemates made while carrying out some of the tasks assigned to them during their stay in the house.

Out of the 20 contesting housemates, only 16 earned some cash rewards in the house. Two housemates (Eric and Tochi) got their rewards outside the house, with Eric getting $500 worth of bitcoin while Tochi got N222,000 from bank. Ka3na and Lilo did not earn any monetary reward at all, as they were the first to be evicted.

According to the calculation from the Africa Magic website, Vee was the highest earner in the house with 6.17 million Naira, followed by Laycon who made 6.03 million and Nengi 5.35 million.

See the list of the top 16 in the image below: 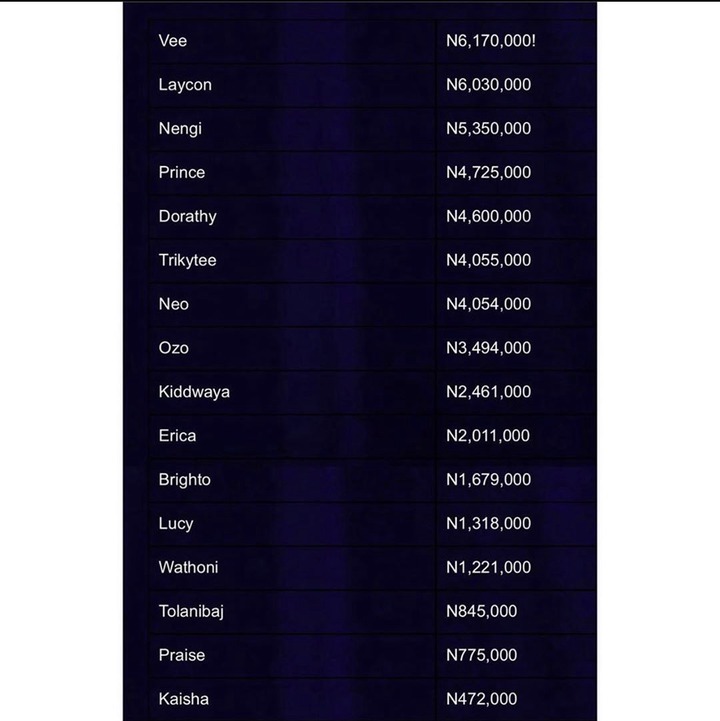 Meanwhile, Laycon was the overall earner outside the house. Read more about the top five earners here.