Reality TV star Venita Akpofure has taken a subtle shade at his cousin and former Big Brother Naija Lockdown housemate, Neo Akpofure, by liking a Twitter post that labeled him a liar for saying his car was gifted by fans.

Neo recently took to his social media page to praise his fans for throwing a surprise birthday dinner for him, and gifting him a brand new mercedes benz car with a whooping cash gift of 2 million naira.

“I have the best fans ever,” Neo wrote with a video of his gifts.

Related: Could this be the reason why Don Jazzy and BBNaija’s Lilo are getting along so well?

However, a certain lady said Neo was lying, she claimed that his car wasn’t bought by fans.

“Car he got since. Remember the show venita was crying? She mentioned he got a car and she did not even know. Neo is such a liar.”

Neo’s cousin Venita, went ahead to like the lady’s post, probably to tell everyone that the lady is stating the fact. See below: 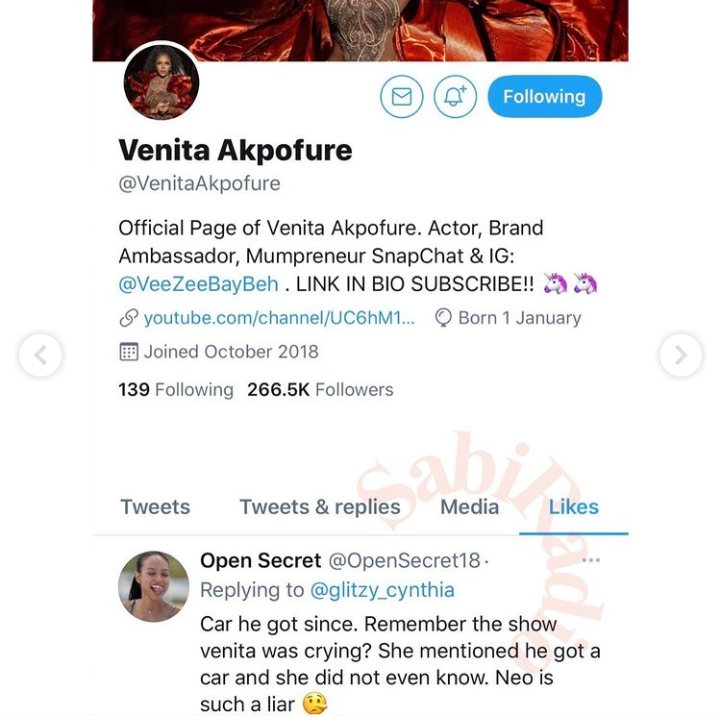 Meanwhile, Neo has not yet responded to this recent claim by the lady.