Nollywood actor and Producer Yul Edochie has joined Reno Omokri in questioning the reason behind the selecting of Northern citizens as EFCC chairmen.

Following the suspension of Ibrahim Magu who was investigated over allegations of Fraud, Mohammed Umar was reportedly appointed as the acting chairman of the Economic and Financial Crimes Commission (EFCC).

Omokri, a Nigerian activist recently took to his Twitter page to question the selection of Mohammed Umar, as replacement for Magu.

“Is there any law that say @officialEFCC chairmen can only come from the North? Magu goes and is replaced with another Northerner, Mohammed Umar. There have now been 5 chairmen. Each has been a Northern Muslim. What’s happening? Are there no credible Southerners?”

Responding to his tweet, Yul Edochie, who seem to share similar opinion with Reno Omokri, expressed disappointment over the one-sided selection by the government.

RELATED: Yul Edochie: Nigerian Youths Are Not Leaders, They ‘Sell Their Souls For Money’ 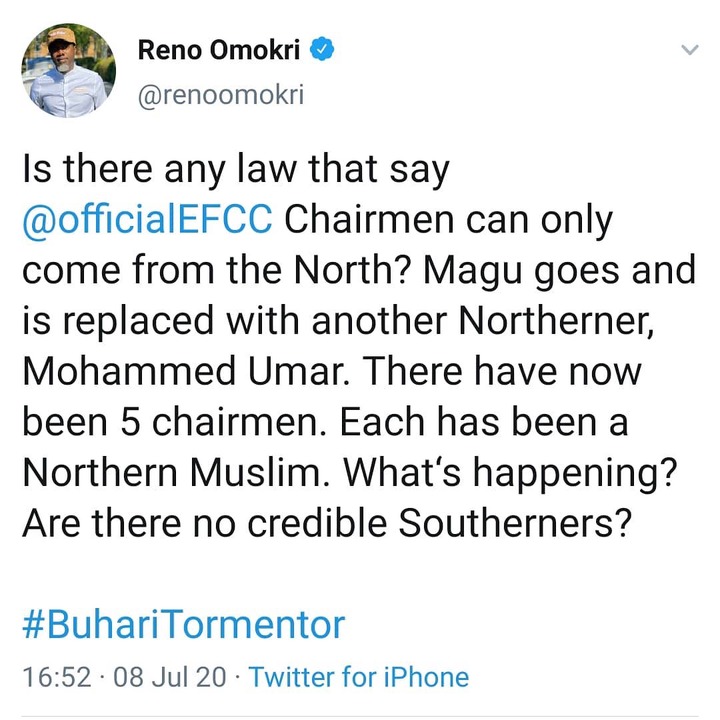 “From the desk of my big brother, the great @renoomokri

Are there no credible men and women from the East, West or South to occupy that position?

Must it remain one sided?

What do you think about this selection by the government, is it an appropriate one? Please share your comment below: