10 people who took their tattoos too far

No Content Available
Many people have various reasons to have something to remember about. While some prefer to keep their memories photographed, others prefers to get them inked on their bodies. A moderate tattoo may appear cool, but when it reaches an extreme limit, certain people think of it as taboo.

The following list is about people who took their tattoos too far.

Ethan is a 24-year-old Australian whom at the time was the world’s youngest most modified youth. His obsession with body modifications started only at the age of 11 when he stretched out his ear. As the years went by, he enhanced his appearance more and more. 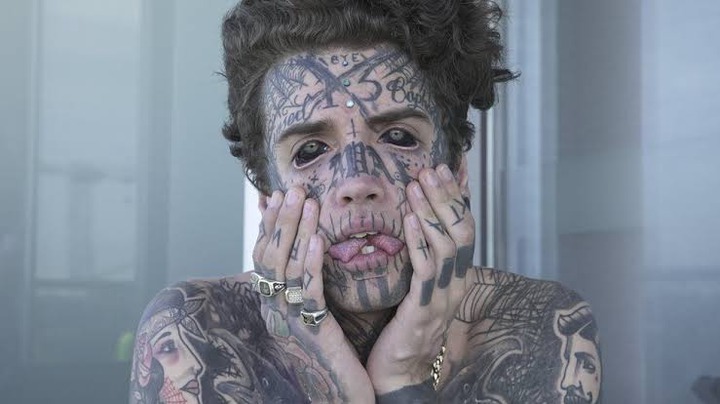 His body is 80 percent covered in tattoos and has over 40 body modifications including a split tongue, the removal of his belly button, spiders under his skin and he also has his eyeballs tattooed black. He said he spent over $15k for those procedures. In case you are wondering why he did it, Ethan said he likes the look of being different and standing out.

Signal is a tattoo artist and model in San Francisco who quit her job in the corporate world to take her life back into her own hands. The reason for her drastic body transformation is because when she was younger, she used to be unhappy with herself and how she looked and this change actually made her feel better about herself.

So far, she spent over $50k to transform her entire body and sixty percent of her body is covered in tattoos from head to toe. Not only does she have a lot of tattoos, but she also has a lot of body modifications, the most recent one being silicone implants in her forehead that appears like horns.

Richie is popularly known as ‘Permanent Clown’ because he tattooed his entire face to resemble just that. This all started when his grandfather took him to the circus. As a young kid, they went backstage and there he met a clown who started teaching him how to juggle. He was fascinated by it. 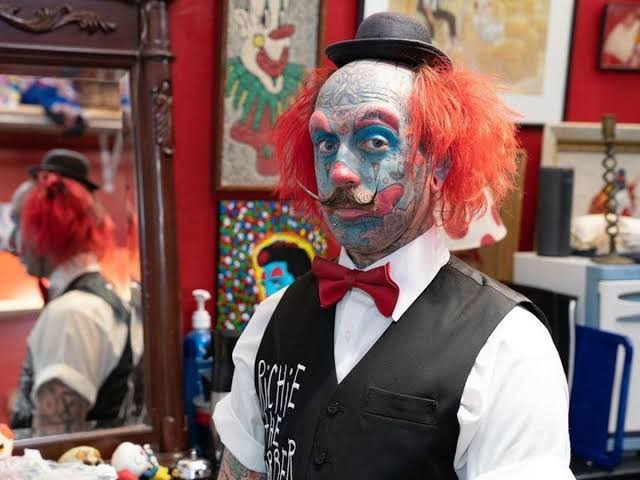 When he saw the happiness that comes from a clown, he wanted to be happy all the time. From then on, he chose to be a clown forever. Not only does Richie have his entire face tattooed but he also has a split tongue and silicone in his eyebrows to enhance the ridges for a more clown-like look.

He uses the tattoos on his body to tell his life history. Eighty percent of his body is covered in tattoos and he has many other body modifications including having his eyeballs tattooed, cutting off his earlobes, 12 implants in his arms and a few more. He hass invested over 80,000 Swiss francs in his body modifications so far. He plans on getting many more implants.

Wahlburger Pascal has received a lot of criticism from people. He is even banned from certain bars and some restaurants won’t serve him. But he says he doesn’t care because he did this for himself and not for others. He also said that a person’s appearance should never play a role on what they are like on the inside.

Marcelo is a father of two who covered 95% of his body in tattoos. His first tattoo was done at the age of 15 and before he knew it, his tattoo obsession spread all over his body. His body modifications include silicone implants in his arms and modifications on his ear, eyes and tongue. Surprisingly, it didn’t cost him much because he did most of his tattoos himself.

Sylvain Helaine was born in Paris France. He started his tattoo journey at the age of 27 and in five short years he covered his entire body from head to toe. The thing that is so unique about him is that he is a primary school teacher. You might think that the kids would be scared of him but after they get to know him for a few minutes, they don’t have a fear anymore. He says the best part about teaching is that he can teach kids to grow up to be kinder adults.

Amber Luke is a 25-year-old Australian that has over 600 tattoos and went blind after getting her eyeballs tattooed. Her journey started at the age of 16 when she was diagnosed with severe clinical depression. Getting tattoos was kind of like a therapy for her. She gave a reason as to why she looks like this now, “I know it sounds very materialistic that I want to change myself but imagine hating yourself so much that you couldn’t even look in a mirror or step outside your house.” Basically, she didn’t like herself back then so she decided to do something about it. Hats off to her because it takes a lot of courage to do something like that. Overall, she spent over $120k for her tattoos and modifications which includes cheek fillers, lip tattooing, tongue split, pointed ears and many more.

Her blue eyes tattoo which blinded her for three weeks was because the artist went too deep in her eye with the needle. Thankfully, she has her eyesight back now.

Alexandra a tattoo artist and a mother of three from Finland who has 99% of her body tattooed. Her fascination for tattoos began when she was inspired by her mom and dad’s tattoos at only the age of nine. Growing up, she was addicted to getting tattoos and meeting her husband who is also a tattoo addict gave her the courage to get her face covered in ink.

She spent $35k on her tattoos and according to her, she has been the victim of verbal attacks in person. Nonetheless, she does have a lot of other people supporting her including her parents, husband and kids.

Mexico’s ‘Vampire Woman’ Maria is a 45-year-old mother of four who is a tattoo artist, business owner and a lawyer. She got the nickname ‘Vampire Woman’ because of her appearance. She has a thing for vampires at a young age and wanted to look like one. She has also been recognized in the World’s Guinness Book Of Records as the most tattooed woman on the planet. 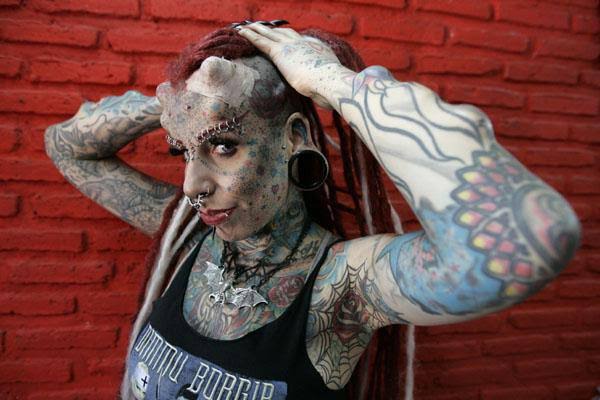 She has 49 body modifications including a split tongue, ear expansion, eye tattoos, titanium horns and dentally implanted fangs. The reason why Maria decided to modify her body like that was because she was a victim of domestic violence in her first marriage and all of these modifications to her body is a sign of courage, strength and liberation. Overall, she spent over $35k on enhancing her body She is also raising awareness worldwide about domestic violence.

Lily Lu a non-binary former tattoo artist who covered her entire body with tattoos. Lily has two and a half bodysuits. That means she got her entire body covered once, then they got fully covered a second time, then did another half on top. Lily’s first tattoo was at the age of 14 and continued doing more and more in her adulthood. She is married and has a daughter as well who happens to be the world’s youngest tattoo artist now.

5 Apps to remove picture background with your phone

ZaZoo Singer Fight His Manager Kogbagidi, Carry Big Stick And Threatened To Smash His Car, Accuse Him Of Using Him (Watch video)

Science of the people put self-worth to be a deep, unshakable belief someone has that they are loved and worthy...

A lady who refers to herself as the "Flexible Nurse" has taken to social media to demonstrate just what she...

Have you ever been in your lowest moment in life? Those moments when you take it too hard on yourself...

Doctors are warning against "vabbing" a new viral TikTok trend that sees single women use their vaginal discharge as perfume....

ZaZoo Singer Fight His Manager Kogbagidi, Carry Big Stick And Threatened To Smash His Car, Accuse Him Of Using Him (Watch video)