Why does Barcelona, a Catalan club have the England cross in their crest?

Why does Barcelona have the England cross in their crest? Even English clubs don’t have it, so why Barcelona a club that plays in the Spanish league? First of all, that red cross on the white background on the Barcelona crest that you think is the England flag is actually Saint George’s cross. The England flag even gets its origin from that cross. Anyways, that’s a story for another day.

But let us find out who is Sir George and why does he have a cross that is significant to people in Barcelona? Saint George who was of Greek origin was a member of the Roman army during his day. He was a Christian and still stands as one of the most venerated martyrs in the history of Christendom. He was canonised after he chose his faith over his life. He refused to renounce his Christian faith, so he was sentenced to death. He died on the 23rd of April 303 A.D and that date has since been chosen to celebrate Saint George’s day in different parts of the world.

So George is an important figure in many countries, regions, cities and organisations, most of which have strong Christian backgrounds and origins. Many countries, regions and states claim him as patron. Some of these countries includes England, Georgia, Ethiopia, Moscow and only two autonomous communities in Spain: Aragon and Catalonia. Do know that Barcelona is in Catalonia? Not only is it in Catalonia, it’s also the capital and the largest city in the community. 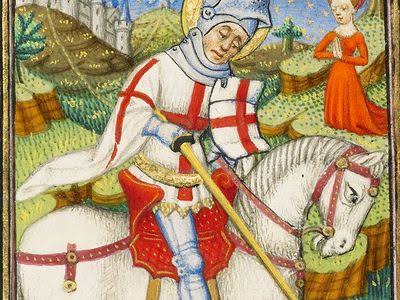 According to legend, a long long time ago, a dragon was constantly tormenting a Catalan village. It would frighten the people and eat the animals and always come back for more every other day. So to appease the dragon and satiate his hunger, the villagers decided to sacrifice one person to the dragon every day and the people were to be chosen by a random lottery system. One of those days, it was the daughter of the king who was chosen to be sacrificed. She had already been offered to the beast.

Winston George whom the Catalan people referred to as Saint Jordi stepped up to the dragon right before he devoured the Princess and killed it. He rescued the king’s daughter and the entire village and from that moment, he became one of the most important figures in their history. Apparently, when Saint George killed the dragon, the blood that flowed went on to form a red rose bush and that also became significant to the Catalan people. From that moment, it became a tradition in Catalonia to offer a rose to someone you love or deeply care about.

So George’s cross has featured in the FC Barcelona crest since the beginning of the 20th century and it has remained even though the crest has been modified nine times since then. That is how significant it is to the people of Barcelona. The cross even features in the city of Barcelona’s flag. How much more significant can it get!

The story of Anthony Lefredo, the man who transformed himself into a Black Alien