Have you ever noticed that Serge Gnabry has worn black nail polish on his fingernails a couple of times? Well, if you haven’t, some huge Bayern Munich fans did some time ago and it got them asking questions. They wanted to know the real reason why Serge Gnabry always wears black nail polish.

Well, at first, we thought it was just a new trend. He’s a young man who is on social media, and has a truckload of money too, so he can pretty much do whatever he wants. Like, nobody really questioned the lad when he started braiding his hair, did they? But well, nail polish for men is not as common as braiding one’s hair, so no surprise that the questions came up. Also, the polish has been on different fingers. One time it was his thumb, another time, it was his pinky. So, it got us a little curious and we did a little digging to discovered that the nail polish was not just a fashion statement, it was a much bigger statement.

Have you ever heard of YGAP? It is an international non-profit organisation which started out in Australia and has since reached other parts of the world. Its primary aim is to create positive change in the world using different channels. In line with its vision to create positive change in the world, YGAP started a campaign named the Polished Man campaign. The aim of the campaign was to bring the world’s attention to abuse experienced by children all over the world.

According to YGAP, just last year alone, about a billion children all over the world were victims of one form of abuse or another. So, the organisation, through the Polished Man campaign, has since been dedicated to raising awareness, as well as funds, to make sure that abuse and violence against kids is eradicated. One of the ways awareness is raised is by painting a fingernail with nail polish, which was exactly what Gnabry was doing. But then, why nail polish? 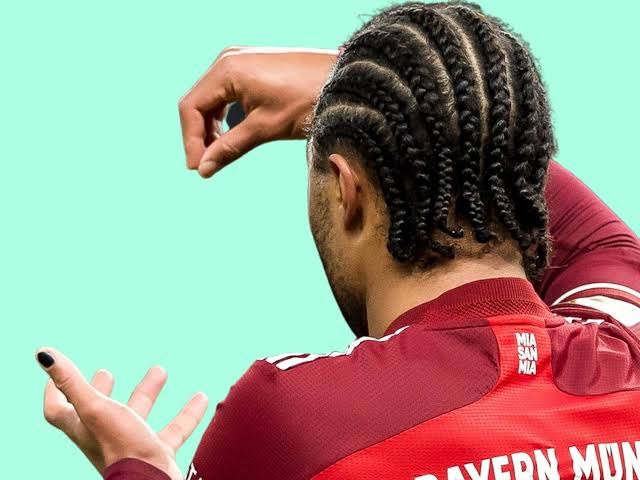 What exactly does that have to do with violence against children? Well, for you to understand, let us talk about how the entire campaign started. YGAP’s co-founder, Elliot Costello, took a trip to Cambodia in 2013 where he met a young girl who happened to be a victim of long-term violence. And you know what was crazy? The violence was continuously perpetrated by the director of the orphanage she was previously living at.

The little girl, whose name is Thea, painted Costello’s fingernails blue and drew a heart on his palm. Elliot Costello grew a soft spot for Thea, and her story got him more interested in kids who had suffered similar fates, and that was how the Polished Man campaign was born. He gave the campaign that name, because in his own words: “men both perpetrate and experience high levels of violence, and are less likely to seek help to recover.”

Since then, YGAP, through the Polished Man campaign, has called on both men and women all over the world to lend their voices to the movement by painting a fingernail blue in the month of October. But well, it has evolved over the years, and people like Serge Gnabry now put on other colours apart from blue, and on other months apart from October. The campaign officially kick-started in 2014, and since then, over a hundred thousand people from more than a hundred different countries have gotten behind the movement.

Also, 7 million dollars has been raised, most of which has gone into trauma prevention and recovery. Other famous people like Chris Hemsworth, Wasim Akram, Zac Efron, and Liam Hemsworth have since joined the movement, and like Gnabry, have been seen painting a fingernail at one time or another. It is actually so nice to see that some of these popular figures have not lost touch with reality and are still able to use their platforms to bring awareness to very important issues such as this.

How about you join YGAP’s Polished Man movement and apply some nail polish on your finger? And if anybody asks you why, give them a quick explanation or direct them to this article. It is important that we all lend our voices to make sure that no child has to suffer any form of violence or abuse any longer.