Super Falcons of Nigeria received a standing ovation from spectators gathered at BBVA Stadium, Houston Texas, on Sunday evening, after coming from two goals down to earn a 3-3 draw against Portugal.

A 95th minute stoppage time equaliser from lively Rasheedat Ajibade gave the African team a share of the spoils in their second game at the USA 2021 Summer Series.

Super Falcons dominated the early part of the game, forcing some saves off Portugal’s goalkeeper. However, an own goal by Chidinma Okeke in the 22nd minute weakened the team.

Portugal capitalised on that defensive breakdown to score their second goal after a sweet volley by Costa went into the net in the 35th minute. They almost made it three before the break, but their 42nd minute goal was ruled offside.

Nigeria however pulled one back in the 44th minute with Rita Chikwelu finding Michelle Alozie in the area to stab home.

Three minutes after the break, Portugal again capitalised on a miscalculated pass by substitute Onyinyechi Zogg to extend their lead to 3.

Nigeria didn’t give up though, they kept throwing all their bodies forward until the 52nd minute when Francisca Ordega broke down the right, finds Ajibade with a reverse ball. Ajibade’s cross is poked in for an own goal under pressure from Asisat Oshoala.

Oshoala later received a knock and was substituted by Ikechukwu, but the deadly trio of Rasheedat Ajibade, Toni Payne and Michelle Alozie kept pressuring for the equaliser.

Ajibade hit the crossbar just 2 minutes before the stoppage time with a beautiful curler. When everyone thought it’s all over for Nigeria, outstanding Toni Payne drove the ball into the area and squared it into a trident of Falcons but Atletico Madrid’s Rasheedat was the one to tap in when the clock was already showing 90+5 minutes. 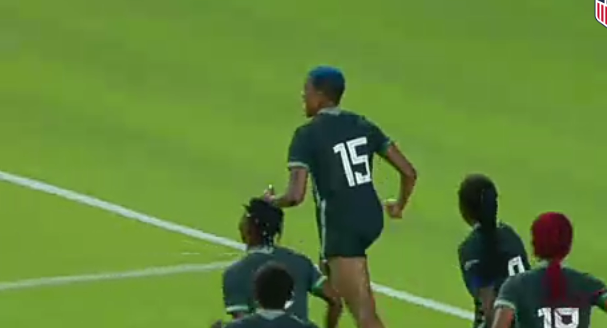 That goal received an immediate standing ovation in the stadium.

Meanwhile Nigeria will test their ability when they meet world champions USA on 16th June.

Police Arrests Three For Robbing, Gang-Raping And Killing A Trader In Edo State