Twitter in crumbles, as hackers invaded the accounts of famous celebrities

Some famous celebrity twitter accounts was recently seen to be flooded with cryptocurrency scam which led twitter to swing to action.

The scammers asked users to send $1,000 to a Bitcoin account with the promise that their deposit would be doubled in return. 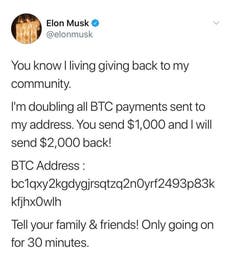 Similar messages first appeared on the Tesla CEO’s account on Wednesday, before it was subsequently spread to other verified accounts.

Meanwhile, twitter requested the affected parties to be patient while they fix the situation. They wrote in a statement:

“We are aware of a security incident impacting accounts on Twitter. We are investigating and taking steps to fix it. We will update everyone shortly.

“You may be unable to Tweet or reset your password while we review and address this incident.”

“As we continue working on a fix, this functionality may come and go.

“We’re working to get things back to normal as quickly as possible.”