Nigerian socialite Dr. Cherry has tackled the fans of Big Brother Naija Shine Ya runner up, Liquorose for supporting the outfit their fav wore for a party on Thursday evening.

Roseline Afije popularly known as Liquorose was spotted on a net-like gown that boldly revealed her underwear during a Tecno-themed party of ex BBNaija Season 6 housemates on Thursday.

While some people admitted that the outfit was too revealing for an African woman, Liquorose’s fans spoke highly of her fashion style.

Dr Cheryl however did not fancy such an outfit for an African woman. She said her love for Liquorose cannot cover the fact that her outfit doesn’t reflect the African setting. Dr Cheryl further adviced fans to stop being hypocritical in their judgement.

“I luv her but that outfit was a no no even for an exposed mind like myself,” she wrote via Twitter. 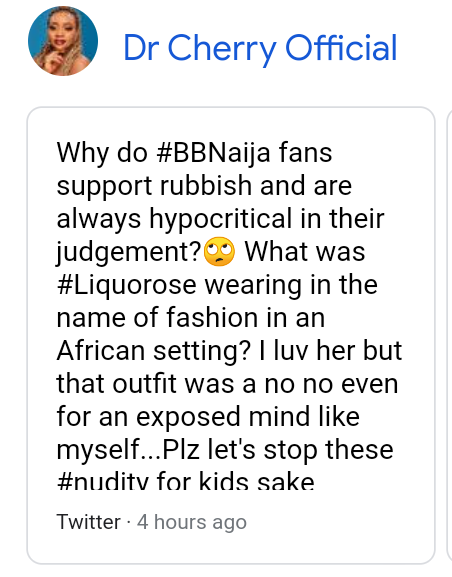