Nollywood actress Regina Daniels has provided a perfect response to those accusing her of deceiving her fans while promoting a brand.

According to a report by Ghgossip, some social media users recently accused the 19-year-old actress and brand ambassador of Mapia Tea of deceiving her fans after sharing a photo of her remarkable weight loss after child delivery.

After encouraging her fans to surpass her feat by getting one of the fat reduction products, a follower identified as @ich_bin_davido replied saying: “Lies….. U are not fat as that jean before”

Another, identified as @_ugly_barbie asked the nursing mother to ‘stop making people believe rubbish’ because she’s trying to sell for a brand. 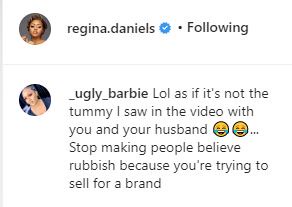 But, the young actress has revealed that she has no time for such unnecessary accusations which adds no benefit to her. She said that the only she care about is her son and to mind her business.

“All I do is take care of my son and mind the business that pays me,” she stated on Instagram.