Home » Records Messi could likely break when the League restarts

Records Messi could likely break when the League restarts

Lionel Messi has equalled virtually every record in football. I may run short of papers if I should start listing all of the Argentine’s incredible records.

No doubt Messi has etched his footprints on the sands of time. At 32, the Barcelona captain however, doesn’t seem to be peaking at all, in fact he stilldesires to keep improving and inevitably break more records.

Spanish LaLiga is scheduled for a restart on June 11, with 12 matches left to play.

Here are a few records that could likely be broken by Messi before the end of the season.

Messi is currently the top goalscorer in LaLiga with 19 goals, five more than Real Madrid’s Karim Benzema. He’s well on course to top the Spanish goal charts for the seventh time.

If that happens, he’ll be ahead of great Zarra, with whom he is currently on par with six pichichi awards.

Leo could also surpass Brazilian legend Pelé as the player with most goals for a single club. Pele scored 643 goals for Santos during his illustrious career.

Messi already has 627 for Barça and needs just 16 more goals to set a new record. With at least twelve games left to play, it wouldn’t be such a big deal for someone in his class. 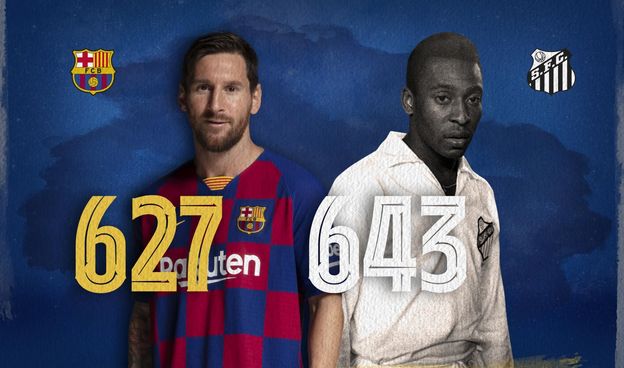 Furthermore, if Barça should win the domestic and European titles, Lionel Messi will:

Match Ryan Giggs as the player with the most titles with a single club (Giggs won 36 trophies with Manchester United while Messi is currently at 34).

Become the player with the second most European crowns. Cristiano Ronaldo currently has five while Gento holds the all-time record of six European titles.

Win a ninth league in 12 years, and the eleventh of the 16 he’s played in.