Italian queens AS Roma have completed the supprise signing of Super Falcons left fullback Osinachi Ohale on a one-year deal.

The announcement was made today July 30, via AS Roma Pidgin twitter page. It reads: 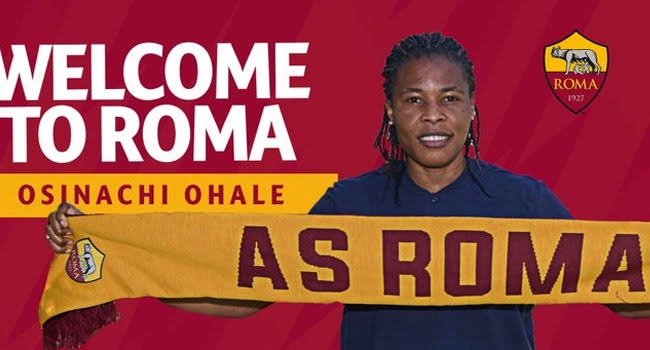 At 28, Ohale’s experience will come in handy for AS Roma Women who were reportedly seeking for an experienced signing from the top leagues (France, Spain, US or UK)

The Nigerian international spent just one season with Real Madrid women before parting ways with them last month after the expiration of her contract.

She made 15 Primera Iberdrola appearances and scored twice before the cancellation of the Spanish women’s league as a result of coronavirus.

Meanwhile the sweet left-footed player have already expressed gladness over her historic move. She said via the club’s official website:

“I chose Roma because of so many things; so many amazing things about the club, about this city and this country that interested me.

“I felt like it would be a great thing for me, to explore and to experience new things and a new challenge.”