Messi: Playing Like this, we will lose against Napoli

Barcelona captain Lionel Messi has vented his frustration on his teammates, describing the club as a ‘weak’ one after loosing the LaLiga title to Real Madrid.

Prior to the resumption of the suspected LaLiga, the Catalan giants led the league by two points over Real Madrid, but some lackadaisical display from the former leaders saw them drop points carelessly.

After seeing his club surrender the title to Madrid, helpless Messi could not hold back on expressing his disappointment.

READ ALSO: The awkward moment when Barça boss watched on as Messi delivered instructions to his players

The 33-year-old star blasted his team for being too “weak” after loosing 2-1 an Osasuna side that finished with 10 men. He said after the post match in a TV interview:

“This game represents the entire year. We have been an erratic and weak team”.

“Madrid did its part by winning all its matches, which is impressive, but we also helped them to win this league. We have to be critical of how we have played, starting with the players, and the rest of the club.”

“The feeling on this team is that it tries, but that it cannot get the job done”.

“Today in the first half they were better than we were and it seems we have to fall behind to react like we tried to do in the second half”. 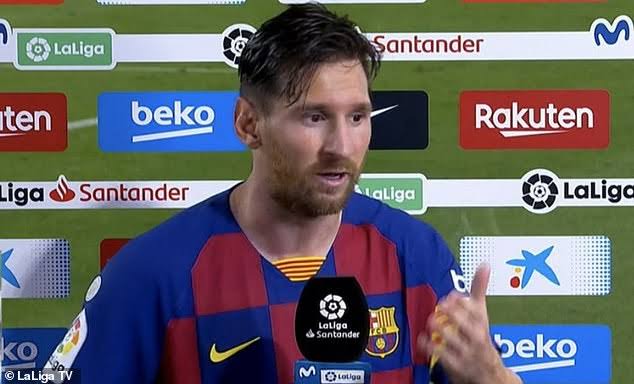 “I said it some time ago, that playing like this we had no chance of winning the Champions League, and it turns out we didn’t even have enough to win La Liga,” Messi said.

“We need to take a breather, let some air in, and clean out minds of all that has happened since December.”

“We have to start from zero in the Champions League and blame ourselves for what went wrong.”

Lionel Messi will at least have have something to cheer him up if he eventually finish the league as top scorer.

He is the leading scorer with 23 goals, two ahead of Karim Benzema.